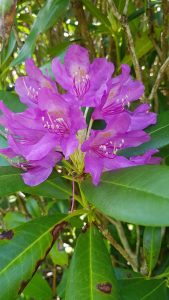 Forest rose, rhododendron hail, which is a genus of rhododendron blooms in May and June, Turkish Mad honey or Deli Bal in Turkish produced by bees benefiting from the flowers is a poisonous plant, requires heavy rainfall and high rate of moisture. Even though it likes acidic soils, it can grow in all kinds of soil conditions. Forest rose with purple flowers has a woody structure. Forest rose wood is medium weight and very hard. Shells are light ash color and light shelled. Forest roses, which have no other benefit than the soil slipping feature on steep slopes, constitute an important problem for forestry works.

What is rhododendron, what does it do?

Forest rose is used to meet the need of fuel in the coastal parts of the Black Sea. Sometimes also used for the production of charcoal. Cellulose value is quite high, it is also used in button making. Forest rose extensively covers the northern coasts of our country. It has a wide area from the north of Istanca mountains to the west and Hopa in the east. Forest roses are also quite a lot on earth. It has large flowers that remain green almost throughout the year. It is also used as ornamental plant. There are more than 850 species belonging to the forest rose. They can be grown at sea level or can be found in areas much higher than sea level. In the Himalayas, there are forest roses that can reach 12 meters in length and reach almost 4000 meters. Although rhododendrons are mostly shrub-shaped, some species are found on tree trunks or branches as absorbent species fed from other plants.

The rhododendrons, which spread widely on the Kinabalu Mountain, adopt the epifit lifestyle. Rhododendron, the scientific name of rhododendrons, means rosewood. Forest rose leaves are almost as hard and oval as a skin. Although rhododendron is examined in 6 groups, rhododendron and hymenanthens are the most preferred species for those dealing with ornamental plants. It is among the plants that always attract attention because of its showy and extremely beautiful flowers. There are even forest rose festivals in some regions of the world. Leaf and especially flowers of rhododendron containing poisonous compounds also poison. Therefore, the honey made by bees feeding on these flowers is called “Turkish mad honey” or Deli Bal in Turkish . In fact, the documents written by Ksenephon about Turkish mad honey ( Deli Bal ) were found. It is mentioned that Greek citizens met with hives in a village where they stayed to find supplies and that the soldiers eating honey from these hives could not stand and vomited and drunk. Realizing this, the soldiers destroyed the three Roman troops by filling the mad honey in bowls and putting them on the side of the road. Turkish Mad Honey  poisoning due to forest rose is very severe symptoms and problems and deaths are rare.